RateBeer announced its ranking of the best brewers in the world, compiled from over 4.2-million customer and industry reviews with more than 33,000 brewers considered, and Firestone Walker Brewing earned a top ranking as No. 10 best brewer in the world.

“This accolade was supremely gratifying,” said Adam Firestone. “Having our beers recognized year in and year out speaks to an incredibly hard-working brew team and long-supporting community.”

Joe Tucker, founder of RateBeer said, “Our winners are big and small, urban and rural, highly specialized or brewing a myriad of styles. RateBeer judges them on equal footing, with many of our reviewers traveling extensively, so it’s not uncommon to see a brewery that some people see as their local gem recognized as a global best. In fact, most of our top 100 winners are smaller breweries.”

RateBeer is a community of beer enthusiasts dedicated to the pursuit and appreciation of good beer. Its mission is to serve the craft beer community as a resource for unbiased, consumer-driven information about beer and breweries worldwide and to enhance the image and worldwide appreciation of beer.

These are Ratebeer’s top brewers in the world for the year 2019. The winners here represent the top 1-percent of brewers worldwide. 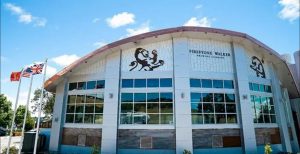